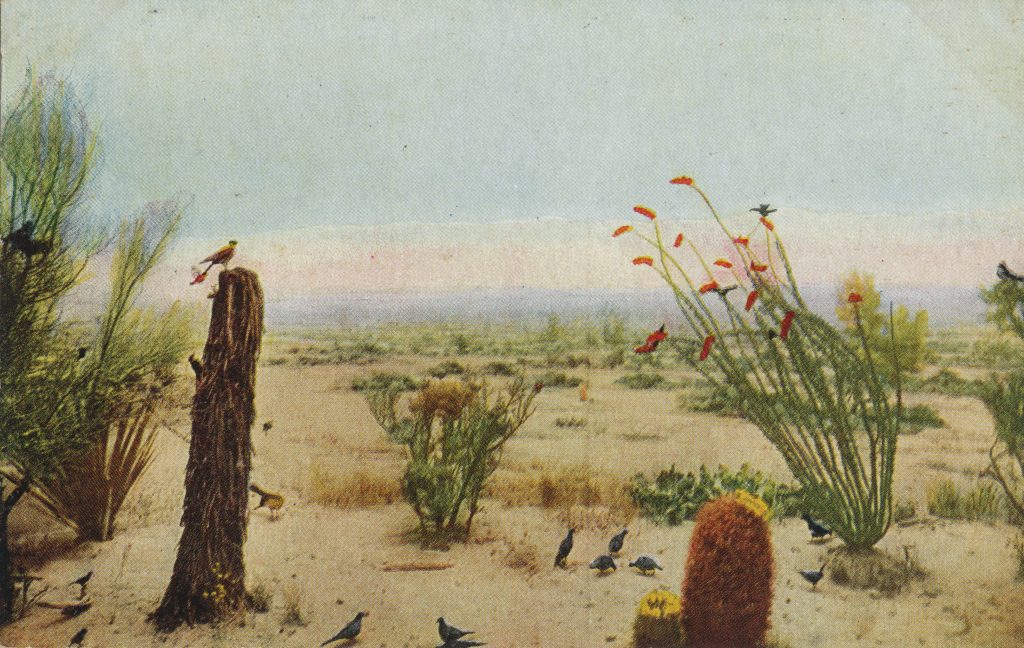 Presented by Mr. Wm. B. Bourn to the Museum of the California Academy of Sciences,Golden Gate Park,San Francisco.

In this exhibit are shown,under natural surroundings, several species of the birds that nest in the Colorado and Mohave deserts of Southern California.
The particular locality represented is near Cotton wood Springs,about twenty miles north east of Mecca,Riverside County,California.

The spring rains transform the desert into a veritable flower garden,the many and varied forms of vegetation sending forth an astonishing amount of beautiful bloom.
Then is the nesting time of the birds,which are there in surprising numbers,some of them,as the Hooded Oriole and the Vermillion Flycatcher,rivaling the flowers in brilliancy of coloration.

The total number of species of birds nesting in this part of the Colorado desert is more than a score, and some species,as Gambel’s Quail,are represented by numerous individuals.The nests,however,are usually rather widely scattered,except in the vicinity of water.In this scene,in order to show a considerable number of the desert species,it was necessary to bunch them much more closely than they would be found under normal conditions.

…It was a hard task to transcribe!

When you click a picture, a big picture (the scanned size) is indicated.